Leading in a “VUCA” world:  Finding Clarity through Story

It’s a Volatile, Uncertain, Complex and Ambiguous (VUCA) world out there. Dr. Bob Johansen says we might as well get used to it. Johansen is the former president and CEO of the Institute for the Future, and the author of two terrific books on forecasting (Get There Early) and leadership (Leaders Make the Future). I recently asked him about leadership principles for these tumultuous times. He says clarity is the key, and story is one important way that leaders create clarity.

Let’s start with the question I’m sure is on most everyone’s mind: In 2007 you wrote that, “The next 10 years will be extremely challenging, and they will feel that way to almost everyone.” Are we really in for another seven years of this?

Yes. I think we have to assume that we’re living in a permanently VUCA world. You’re better off assuming that there’s going to be Volatility, Uncertainty, Complexity and Ambiguity. But there are still going to be winners and opportunities and the potential to make the world a better place. We just need to change our expectations.


All this uncertainty can leave employees unfocused or even paralyzed. As leaders, how do we keep our teams focused and productive?

The leadership skill is clarity. Clarity’s always been important, and in a VUCA world it’s even more so. The way to succeed is to be very clear about where you want to go, and very flexible about how you’ll get there. In the military that’s called “commander’s intent.” The leader defines the outcomes, but empowers teams to figure out how.

You make a strong distinction between “problems” and “dilemmas” – why is that so important?

So for example, if you’re a large manufacturer and you’re selling to Walmart, you will probably come to realize that Walmart is both a very large customer and a very large competitor – and since we’re never going to solve that problem, we have to figure out how to make it work. We have to build strategies that allow them to be both a competitor and a customer.

This is the leadership skill I call “dilemma flipping.” You realize you’re not going to problem-solve your way out of this, that a lot of the challenge you have won’t be solvable and yet you have to figure out a way to win anyway. The world may be VUCA, but you still have to make decisions. You still have to find ways to win.

We’re trained in school to solve problems, and many of our large organizational cultures are built around this same notion. How do we make the shift from trying to solve problems to embracing the mystery inherent in dilemmas?

I think some of the good business schools are making that shift, but you’re right that the current generation of leaders was trained to problem-solve and control. The primary way to learn dilemma sensemaking is through simulation – get yourself into a gaming environment where you can try out different leadership styles in response to different dilemmas. This is one area where the military is way ahead of the business world, but it’s something we can learn. The leadership skill is immersion. You put yourself in a dilemma-ridden situation and you figure out how to lead through it.

Two of the skills you argue leaders need are Sensing and Sensemaking. What do you mean by those terms?

Sensing is figuring out what’s important and what’s worth following. If you’re looking to the future, almost nothing that happens is completely new – chances are it was tried and failed long ago. So, the real question is not whether something is new, it’s what’s ready to take off. And that’s the sensing part. You have to figure out, out of all the things that are happening out there, what’s worth my attention?

Once you’ve got that on your radar, the leadership skill is Sensemaking – how do you make sense out of that for your own work? This is taking your foresight and carving out an insight – what does that mean for me?

In Get There Early, you say that stories are how we make sense of dilemmas. How does Story add to Sensemaking?

The story is the biggest motivator for change. A good forecast is nothing but a story from the future that provokes insight. And then once you have the insight embodied, you need a story that carries that insight to others.

Stories create clarity. Southwest Airlines is a great example. Their story is, “We’re going to be the on-time, low-cost airline that’s competitive with the cost of automobile travel and has a touch of fun.” The clarity of their story empowers Southwest’s employees to create experiences that embody the story for customers.

Most of today’s leaders are good storytellers, and have good stories they tell. But they are sometimes not as good at listening for stories. We know that just about the time you get tired of telling a story is right when it’s probably starting to gain traction with your audience. That’s true, but it’s also a trap. If you do nothing but tell the same story over and over again, then you never learn any new stories. Leaders have to always be looking for new stories, listening to new sources, and finding new ways of helping others understand old stories.

Some business leaders see story as a “soft” concept, and storytelling as a soft skill. How would you rebut that?

I think it is a soft skill. A lot of leadership requires soft skills. But that doesn’t mean you can’t be quantitative as well. The best stories help make sense of the complexity. 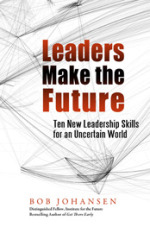 The title of Leaders Make the Future suggests something more than simply embracing ambiguity and being open to possible futures.

The problem with ambiguity by itself is that it encourages a passivity – as if the future is only happening to us. I’m really trying to encourage an activist view toward the future – not to trust others to make it, but to realize there are lots of people out there who want to be engaged in shaping the future. And a leader’s job is to figure out how to engage them.